Recently, my wife Chris and I found a new show to binge watch on Netflix; The Great British Baking Show. It’s a competition show where contestants have to bake a number of items each week and they’re judged and sent home week by week until there is one winner. It’s not like a lot of the American competition shows where they overly build up the hype/tension. We love that aspect of it. We also love that there are just an absolute ton of phrases that we end up having to go look up.

We finished all 3 seasons pretty quickly (uh, 2-3 weeks), and when we got to the end we found a follow-up show called The Great British Baking Show: Masterclass. On Masterclass, the two judges, both long-time professional bakers, go through each season of the show and pick a handful of the bakes that took place during the competition, and they walk through, step-by-step, the process on how to make the dishes.

Neither Chris nor I have ever baked bread before. During our binging of the show, we were already getting the itch to try. But, once we watched a couple episodes for Masterclass, it was a foregone conclusion that we were going to give it a try.

The sign of a really good teacher is when they take something that is very complex and explain it in a way that even an absolute beginner gets the sense that it’s easy. Or, at least that they could do it without too much trouble. I would say that Paul & Mary, the pro bakers on the show, they really do make it look effortless.

Some of the recipes, even with step-by-step instructions, still look to be pretty technical. But, there were a number of items that didn’t require a huge amount of ingredients and looked like something we could tackle without too much trouble. We settled on Paul’s Chocolate and Cherry Loaf.

Time for a trip to the store!

On your marks, Get set, BAKE!

Yesterday morning we ran to the store to pick up some supplies. Even though our first bake didn’t need any special equipment, we did end up buying a couple spring-form pans (hello, cheesecake), a digital baking scale, and a few other items that will come in handy down the line. We then picked up some flour and a few other ingredients and headed back home.

As you might imagine, being first time bakers, things that will eventually seem super simple were a little confusing to start. We threw the ingredients in a bowl and just dove right in. 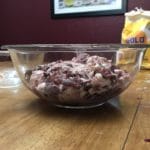 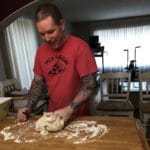 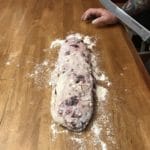 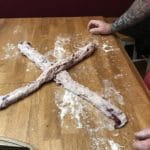 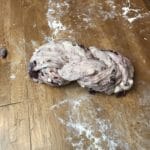 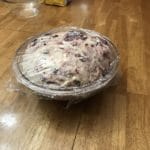 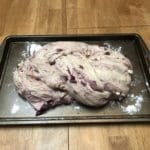 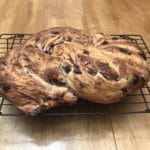 As I mentioned, this was both of our’s first time baking bread. So, there were bound to be some mistakes. Thankfully, ours were all pretty minor.

Issues or not, the final product ended up being quite tasty. I’m pretty darn proud of how it turned out and I can’t wait to figure out what we’re going to bake next.