Today, Chris and I made a spiced orange cake with orange mascarpone icing for the second time in a couple weeks. I wouldn’t normally write a second post so soon after the first, but giving the learning experiences this bake provided this time around made me think it was a good idea to write this stuff down so we don’t make the same mistakes twice.

The original recipe calls for baking 2 cakes and cutting them in half horizontally. This, we thought, resulted in a couple of tough situations. The first being, cutting them in half. Chris was able to do a good job of it, but even still, the contents in the middle are super crumbly. The second issue is related to that crumbly middle. Spreading the icing onto the layer of cake that is the middle part of the cake wasn’t easy and seemed to make it a bit of a mess.

Because of the issues related to cutting the cakes, we came up with, what we thought was a great solution; double all the ingredients!

We figured that if we doubled the ingredients, we wouldn’t need to cut the cakes and could simply stack each cake on top of each other for a super tall cake. This would mean, not cutting the cakes in half, and also that we’d be spreading the icing on the flat surface of a normal cake rather than the crumbly bits inside.

What could go wrong?

This cake has a large amount of butter in it. Which is great for making the cake super moist. But, it means that the cakes are pretty delicate. Moving them out of the pans and onto the wire racks to cool can cause the cakes to break apart. We cooked 2 at a time and had to move them to the wire racks so we could start cooking the second batch. Next time, we’re going to let them cool in the pans a bit longer before trying to transfer them to the pans. Or, we may pick up one of these handy cake lifters so that we could flip the cake onto a plate first, remove the parchment paper from the bottom of the cake and then use the cake lifter to flip it back over. I think it’ll work. Thoughts?

One lesson that we learned, we actually learned the first time around and fixed during this bake. When we made the cake the first time, we basically made the cake, then the icing and did the construction all right in a row. This didn’t leave much time for the cakes to cool completely. This time, we actually made the cakes the night before, then let them sit overnight and we made the icing and constructed the cake the next day. This helped, but unfortunately, we were still having issues with our cakes being so moist that moving them around, stacking them and icing them was causing some crumbling action. 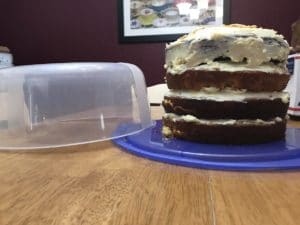 The last issue… Holy crap, this is one tall cake. We bought a cake holder, but the cake is actually taller than the holder. Oops! OK, so, not the worst issue. We’re just going to have to eat the cake quicker. Darn darn darn.

In this pick, you can see that we started to try and ice around the sides of the cake. But, we weren’t going to have enough icing to cover the whole cake. So, the results are a very messy looking delicious cake. I’ll take that over a beautiful cake that doesn’t taste very good every time!