You may not know this about me (I kid), but I love CrossFit. It has been a major part of my life the past couple 2 and a half years. There is no mood I can be in that a CrossFit workout doesn’t make better. I’ve had gym memberships before, but nothing beats the coaching, comradery, support and the friendships built through the shared experience of CrossFit.

I took a couple weeks off and hated every minute of it. For a while, I would go with my wife when she was working out and I’d cheer on the crew working out. But eventually, that became too depressing, so I stopped going at all for a few weeks. I’m not sure which was worse, actually. 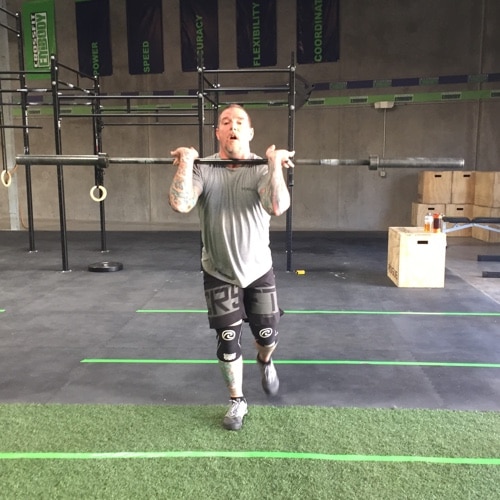 This was me doing a workout during the 2016 Open

Knowing that the CrossFit Open was coming in February, I knew I wanted to compete in the event. About 3 weeks before the Open was set to start, I went back to the gym and started out taking it pretty easy. But as the Open neared, I started pushing a bit more. I ended up being able to compete in the Open, but I wasn’t nearly at the spot I wanted to be in. I had to scale most of the workouts, and I was still in considerable pain on a regular basis.

Then, things got really bad. There wasn’t really one specific incident that I can look back on this second time. Other than me really just pushing too hard too fast. I was having a terrible shooting pain in my leg and it was uncomfortable to lay down, sit down or stand up. That didn’t leave a lot of options. Oh, and the pain in my lower back started to really intensify, too. I tried getting massages and going to the chiropractor. Unfortunately, nothing was working. Once again, I was on the sidelines.

I went to a doctor for some x-rays, and those didn’t turn up anything. I then went for an MRI and we found the issue. Two bulged discs and was also suffering from sciatica. It took a few weeks to get everything scheduled, but I eventually ended up getting two shots in my spine to deal with the pain. The relief was virtually instantaneous. But now, more than ever, I knew it was time to be patient.

About a month after the shots, I was back at my Dr’s office for a check up. I was feeling antsy to start physical therapy or whatever he had in mind as a next step. To my complete surprise, when I asked about PT he said, “You are already used to working out 5-6 days a week. I want you to go back and start really slow. Avoid lifting anything heavy for now. Just get back to moving.”

So that’s what I did. I went back and I started slowly. For the first couple weeks, I would go and do some stretching and ride the bike. Just to work up a sweat. Nothing strenuous. Then, I started incorporating some very light lifting. And to say that I focused on me form would be an understatement. Every lift I did was slow and cautious. It also helped to have the watchful eye of Coach John on my at all times. I often said that it felt like I had two wives when I was at the gym. I wouldn’t change that for the world.

Weeks and weeks and weeks of being careful and drilling technique back into my brain had me feeling better, but still not near 100%. I was still having some pain in my leg from time to time, and hinging at the hips would still cause pain.

Then, Coach Lance stepped in and gave me some exercises to help strengthen my glutes. I started doing them daily and it started paying off pretty quickly. I was feeling results within a week. Within a few weeks, the pain in my leg was virtually gone. And as I write this now, I can’t even recall the last time I had pain in my leg. 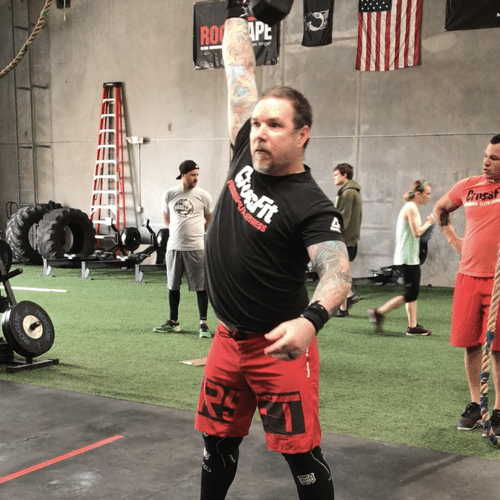 Here I am, feeling strong, during the CrossFit Open 2017

Well, here we are. It’s late February which means, it’s time for the CrossFit Open to start. The announcement for the first week’s workout happened on Thursday, and yesterday a big group from our gym got together and do the workout. When I woke up in the morning, I was feeling very excited, and a fair bit emotional. It has been roughly 14 months since my initial injury, and after all that time, I’m finally getting the opportunity to take part in the open feeling pretty damn good.

The workout was a miserable one. I’d be lying if I said something cheesy like “it was miserable, but I loved every minute of it.” No, it was pretty darn miserable all the way through. But I can tell you this. Today, a day after the first Open workout, I’ve seen a LOT of people complaining about their lower back being sore from the workout. The workout had two movements that pretty much guaranteed your lower back was going to be on fire after. And yet, here I am after competing, and competing hard, and I have no pain in my lower back at all.

If you asked me how I feel right now, I’d say that I’m probably sitting at about 95% back to where I was pre-injury, and I’m pretty darn happy. I’ve gained some weight that I’m looking to get rid of and my cardio is certainly not what it was before (not that it was awesome before, but it was better than this!) But from a weightlifting standpoint, I’m able to lift just about as heavy, heavier in some cases, as I was able to do pre-injury. That has been really excited.

There have been plenty of times in the past 2-3 months when I have been feeling really good and have wanted to push the envelope and see what I can do when it comes to weightlifting. But, I’m able to remember the pain I was in and the depression I went through when I wasn’t able to workout at all. I never want to experience either of those things again.

It may sound like those last two paragraphs are counterintuitive. Remember when I said that we preach “Practice form and the weight will come”? Well, the weight is coming back quicker than I would have expected. Lifts I could barely do before are feeling pretty routine.

Now, more than ever is when I need to buckle down and remember every single day that I have to focus on form and technique every time I’m at the gym. It only took a single 8-minute workout at a competition that at the end of the day means absolutely nothing, to almost take it all away from me for good. I don’t want that to ever happen again.

So I say to myself today, stay patient.